Yet another Denver Comic Con 2017 (DCC) has come and gone, and in my opinion, it was the best once yet! The show room had more merchants, artists, and authors than ever before, there was a wide variety of panels for people to attend, and some really incredible celebrities for people to meet. Many of the problems from last year were fixed this year too. As DCC continues to grow though, and with a record attendance this year, more problems inevitably popped up. I will be reviewing Denver Comic Con 2017 and give my perspective, through the eyes of an event planning intern, on how successful of an event I think it was.

The lines getting into DCC this year were much more efficient! Three lines were set up for getting into the Colorado Convention Center. One being for merchants so they could set up early, another being for ADA and those with speed passes, and the last being for general admission. There were multiple doors for bag checks and a few other doors for those with no bags. My family and I made sure to get to the convention center at least an hour early each day, and since doors opened 45 minutes early this year, we got into the building well before the Con technically even began.

There were many more panels, celebrities, merchants, authors, and artists this year too! Despite the drastic amount of cancellations that DCC faced this year, they still managed to have so much variety that there was truly something for everyone. It was almost overwhelming for me trying to decide what I wanted to attend each day because so much of it sounded amazing! The highlights of the Con this year for many people though, were the Justice League Reunion with seven cast members as well as a Buffy the Vampire Slayer 20th Anniversary Reunion with four of the cast members.

Sci-Fi Speed Dating was a huge draw this year as well, with some of the sessions including upwards of 100 people! I have a friend who met her current fiancé at Sci-Fi Speed Dating a couple years ago, so this event has been really successful. A slight disappointment a few of my friends had this year though, was that because the sessions they attended were so big, they didn’t get to meet everyone. The speed dating sessions had to fit into a one-hour time frame, so people only got to meet about 20 of the people in their room. With the inevitability that some of the people you meet will be out of your age range or simple not your type, it’s understandable that they would be frustrated.

One of the biggest problems that DCC often runs into is that up until this year, it has always been scheduled during Father’s Day weekend, which also happens to be the same weekend as Denver Pride Fest. While some people have really enjoyed being able to celebrate Father’s Day at Comic Con, others get frustrated that they have to skip that day of the Con because their Father’s don’t want to go. Many people also struggle with deciding if they would rather attend DCC or Pride Fest since they are passionate about both. Denver Pride Fest already makes it extremely difficult to park in downtown Denver as well. With DCC and Pride happening at the same time, parking garage prices skyrocket. Needless to say, many people were happy the DCC was during a different weekend this year.

Unfortunately, the amount of food available for attendees was no better this year than last year. It seemed that they had the same outside vendors. And, like I said in my previous post, most outside vendors were dessert companies and it is extremely difficult to find food if you are vegetarian or vegan.

Overall, I think that Denver Comic Con was a huge success! They managed to solve most of the problems from last year, as I am sure they will do next year with this year’s complications. There was a huge variety of activities for people to do, an abundance of merchants for them to purchase things from, and a lot of impressive celebrities that people were excited to get to see. DCC never fails to be absolutely amazing and I’m sure that next year’s will be bigger and better than ever! 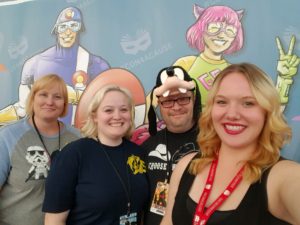 My sister and I waiting in line on the first day to get into DCC 2017, giddy with anticipation! 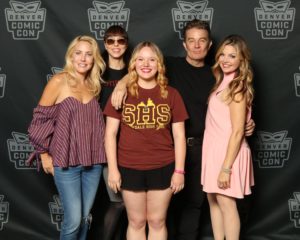 Myself with four of the actors from Buffy the Vampire Slayer. From the left is Mercedes McNab, Juliet Landau, James Marsters, and Clair Kramer. 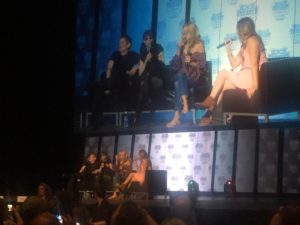 The Buffy the Vampire Slayer 20th Anniversary Reunion spotlight with the actors who played Spike, Drusilla, Harmony, and Glory. 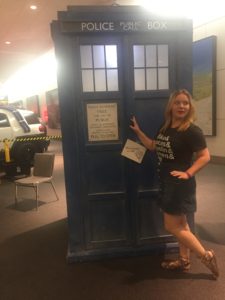 Here I am posing in front of the TARDIS replica from Doctor Who. 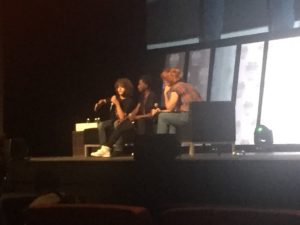 The panel with Gaten Matarazzo and Caleb McLaughlin who play Dustin and Lucas on Stranger Things. 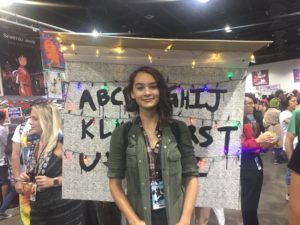 My favorite cosplay from the whole weekend. This girl is dressed as Joyce from Stranger Things, complete with the Christmas light wall.