Hi there! My name is Savannah Nichols and I am the current intern at Willie Ripple Events. While I grew up in Colorado, I have been going to school at Wartburg College in northeastern Iowa for two years now. I sing in choir, am a member of the PRSSA (Public Relations Student Society of America), and am the social media coordinator for St. Elizabeth Chorale and Best Buddies while majoring in Public Relations and minoring in music. I am so honored to be interning with Willie Ripple Events and have already gained valuable experience in event planning during my short time here.

Willie has asked me to write a blog post about attending an event and how I see it “through the eyes of an intern.” As a Colorado local, one of my favorite events to go to each year is Denver Comic Con, and since that event is coming up in a couple weeks, it was the perfect opportunity! I have attended the past four Comic Con events and have loved every one of them. I was originally drawn to DCC because I come from an unabashedly geeky family that raised me to be the same and keep coming back because of its lively and eccentric atmosphere. I leave DCC every year sad that its over and anxious for next year’s.

DCC is a three-day multi-genre convention that truly has something for everyone. They not only feature comic books but also television shows, novels, artists, and movies. The convention is put on by the founders of the organization Pop Culture Classroom which seeks to educate people and improve their literacy through comic books. Although DCC can be an expensive event to go to, you can feel better about the amount of money you end up spending because proceeds from DCC go towards funding Pop Culture Classroom’s staffing, supplies, and infrastructure. DCC’s first year was in 2012 and it had a meager attendance of 27,700 people, but as word spread and it gained popularity, it pulled 114,900 people in 2016! The convention has been so successful that in 2013 it was voted the best fan convention by the editors of Westword.

Along with a growing attendance, DCC has managed to get an increasing amount of prestigious celebrities in all pop culture genres including Stan Lee, Cary Elwes, Ian Sommerhalder, and William Shatner. Fans can not only meet the stars but also attend their “spotlight” where they can hear about their latest work in an interview and even take part in asking them questions.

DCC has a strong sense of comradery that I haven’t encountered anywhere else. Many people say that their only chance to truly geek out and connect with other people with the same passions as them is when they are at Comic Con. A lot of attendees show their love for a particular character by cosplaying, which is dressing up as a character from pop culture. Some of the costumes are honestly amazing and it’s typical to see two people dressed as the same character or as characters from the same show stop and take a picture together. One of the biggest draws for many people at DCC is attending the annual Cosplay Shindig on Saturday night where contestants walk the runway, showing off their homemade costumes. A winner is then voted on and chosen by the end of the night.

Festivities don’t end there though. Each year DCC teams up with restaurants and bars in Denver where they hold official after parties. While I’ve never attended one myself since I’m under 21, I’ve heard that they are really fun and often feature a live band, food and drinks, and a friendly atmosphere. Comic Con is an event that can start early in the morning and run late into the night if you want it to!

One of the flaws that I’ve noticed in the most recent years though, is that due to the quickly rising number of attendees, the lines have gotten ridiculously long. It was greatly underestimated just how many people would be coming to DCC last year so they weren’t very efficient in getting people into the building. Some people ended up waiting in line for hours and after a while, two more doors to the convention center were opened so that people could get in faster. This caused a lot of issues because not only were people anxious to get into the convention, but celebrity spotlights and other panels were scheduled to begin an hour after doors opened and a lot of people who were eager to attend those ended up missing them.

Another draw back is the lack of food. DCC has the convention center cater and also brings in outside caterers, but they could definitely use more. Some years have been better than others, but last year it seemed that majority of their outside caterers were dessert companies. They were also severely lacking in vegetarian options and if you’re vegan, forget about it. The lack of options also made the lines for food extremely long and I had to wait almost half an hour to get lunch each day. It’s much more efficient bringing your own lunch rather than buying something while you’re there.

Looking back on the past four years I’ve attended DCC, this next year is sure to be a great one. They managed to get some incredible celebrities and speakers that will make the weekend unforgettable. I can’t wait to have an amazing time at the convention and hopefully learn more about event planning while I’m there!

To be continued in July… 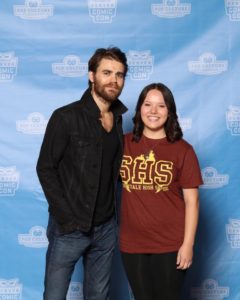 Here I am at the 2016 DCC with Paul Wesley who played Stefan Salvatore in The Vampire Diaries. 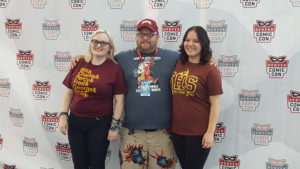 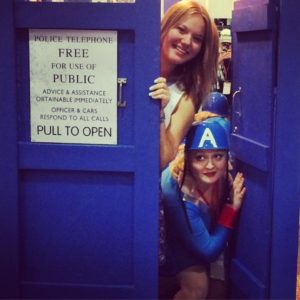 My sister and I at peaking out of the TARDIS (from Doctor Who) replica they had at the 2015 DCC. 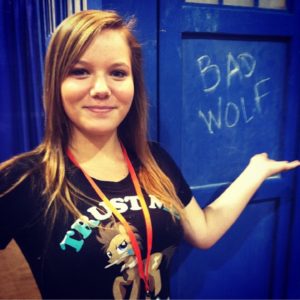 Here I am at the 2014 DCC posing on the backside of the TARDIS (from Doctor Who) replica complete with the Bad Wolf graffiti.