Why You Should Consider Hiring a Food Truck

A week ago my intern and I attended Civic Center Eats which is Denver’s largest gathering of gourmet food trucks and carts. There was an assortment of trucks including ones that serve pizza, BBQ, ice cream, and even Ethiopian food! The vibrant exteriors of the trucks ensure that this event is always colorful and the live music gives it a cheerful atmosphere. Civic Center Eats happens every Tuesday, Wednesday, and Thursday from 11 AM to 2 PM running between May and October.

Food trucks have been gaining in popularity over the past few years. A source says that there is a total of 4,130 food trucks in the U.S. and that more than 2.5 billion people eat street food from a food truck every day! Food trucks are so popular that a movie titled Chef starring Jon Favreau came out in 2014 which follows a prestigious chef who decides to open a Cuban food truck after he has been fired from his job at an L.A. restaurant. 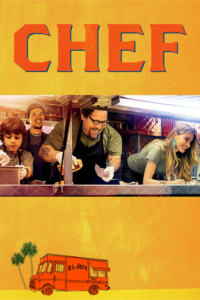 Food trucks have been around since the gold rush when the country started expanding westward. In the mid 1800s, a man named Charles Goodnight realized the difficulty of preparing food when you’re traveling for days at a time and saw an opportunity to start a business. He opened his chuckwagon which sold meat, cooking supplies, utensils, and even medical equipment to passersby. People began to imitate Charles and the mobile food industry began to thrive. It carried through the early 1900s for people who worked night shifts and couldn’t eat at restaurants that late because they’re closed. Food trucks have gained popularity in more recent years due to the recession. A lot of chefs lost their jobs and started food trucks because they were a cheaper alternative to a restaurant and could continue doing what they love. People have also had less money since the recession, so they’re looking for gourmet food that is cheap and easy to get.

Judy Morley, who owns the food truck Tilford’s Pizza with her husband Steve, said that they decided to start a food truck because it “seemed like a fun business.” Judy and her husband used to live in Southern California where wood fired pizza became a huge trend. By 2014, wood fired pizzas were everywhere and they saw an opportunity to start their own company. She said that owning a food truck is great because you don’t need a lot of capital and you don’t need lease space. Rather than having to get customers to come to you, you come to them! The longer you work in the business, the better you learn where the hot spots in neighborhoods are. Judy says that while the food truck business is fun, it’s also time consuming. On average, she and her husband work six to seven days a week with two events every day.

“The Insurance on a food truck is very unique, it is part restaurant and part car insurance.  Covering the truck when it is on the road just like our own auto insurance and covering the truck when it is making food while parked just like the restaurants we frequent.  Making sure your business and vehicle runs properly while protecting the business from all the potential hiccups like spoilage, food-borne illness, equipment breakdown, and food contamination shutdown.  Being mobile is the best part of these types of businesses but making sure the bills get paid is the most important factor. Having the mobile business interruption on the insurance policy is a must.  If the truck is in the shop you can’t make money when you aren’t out there feeding people.  This would allow you to receive income while your business is being restored, not only to cover expenses but also lost revenue.  Let us review your coverage to make sure your policy is as delicious as the food you make.”

So, why should you consider hiring a food truck? Food trucks are a great way to have affordable, gourmet, and often locally sourced food at your event. And with the wide variety of food trucks in the U.S. as well as just in Colorado, you could have something fancy such as crepes or something more quirky, like street tacos. It’s no wonder food truck weddings are one of the newest trends! Some thing to consider if you are going to hire a food truck though, is that on average, it takes one to two hours for a food truck to get set up before they can serve food. Also, most food truck websites have a “follow the truck” calendar where you can see where and when they are going to be and what days they are still available for hire.

Scroll down to see pictures from our trip to Civic Center Eats and consider hiring a food truck at your next Willie Ripple Event! 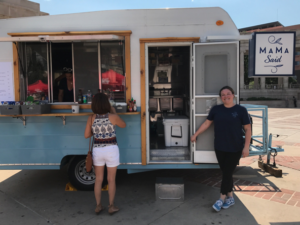 Tilford’s Pizza food truck who’s owners were generous enough to be interviewed for this blog post. 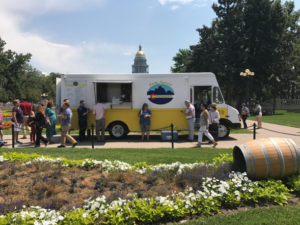 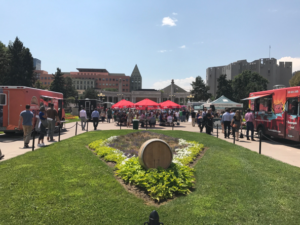 The view looking down Civic Center Park during Civic Center Eats. The whole walk way is lined with various food trucks on either side.